Crypto-Charity and Ukraine: A Brief Examination 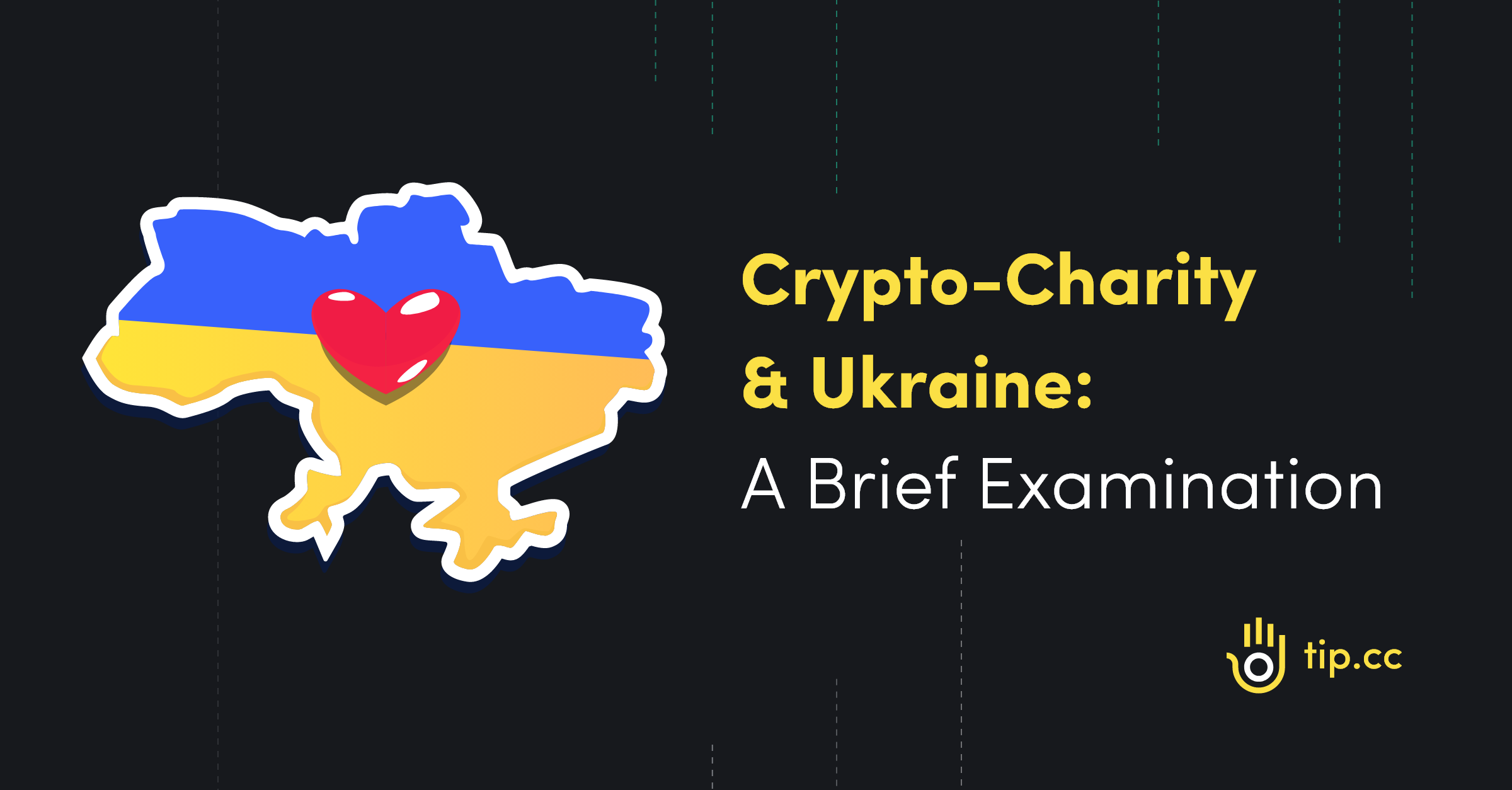 The Russo-Ukrainian conflict is not new. It has technically been taking place since February 2014 and began with separatist fighting in the Donbas and Crimean peninsula, and has since early 2022 escalated into an international flashpoint. Though the fronts have been quiet for over seven years, the recent surge in violence has led to a number of alleged charities attempting to solicit cryptocurrency donations from all over the world. This article is an exploration of those solicitors, followed by my best assessment of how to ACTUALLY DONATE, ensure your funds arrive in the right place, and go towards the aid you prefer they be spent on. This conflict proves, concisely, the connected nature of our world, and how a fight thousands of kilometers away from your home between two nations can affect all who occupy any facet of the cryptocurrency space.

Like many readers from outside the western hemispheres, and some within them, the conflict between the Russian military and the state of Ukraine was experienced by me as a profoundly disruptive force. Millions of people rallied to their cause in resisting Russian aggression, loudly and on social media for all the world to see.

As more news of civilian resistance to the occupying forces of Vladimir Putin came to fruition, so too, did the rush of charities seeking to improve the situation. Following in their wake was a cavalcade of conmen.

We could all watch live, on Twitter or any other social media platform, as hundreds of people posted pictures and stories about what was happening. As the world’s technology continues to evolve, and livestreaming becomes more accepted as a common way to receive information, this potential for live on-the-ground coverage continues to rise at an exponential pace.

Cryptocurrency investors, traders, and the spaces they occupy often feel as intangible as the coins we buy and places we spend our time: in Telegram and Discord chats, and on Twitter… but $BTC is a profound thing. Its power to shrink the size of planet Earth down to a pebble is not to be underestimated; as a consequence of the globalizing force that is $BTC, $ETH, and other cryptocurrencies besides, the war in Ukraine directly affects us all.

Dozens of technology workers, hundreds of teams, thousands of projects and millions of dollars go in and out of Ukrainian hands because of the sheer connectedness of the cryptocurrency space. Dedicated Ukrainians working in crypto have been displaced from their computers and their homes, ruining their ability to contribute to the projects they signed up to develop. This goes far beyond crypto: tech workers all over Ukraine have been disrupted, and the onus is on the rest of the space to step up, and crypto certainly has.

In a thread of tweets in late February 2021, as the war grew in intensity, the official account of the Ukrainian government posted a call for cryptocurrency donations that included $BTC and $ETH addresses, followed shortly by the addition of a $DOT address after crypto-celeb Gavin Wood donated $5+ million in $DOT personally.

Following the start of the war, President Zelenskiy legalized cryptocurrencies to help the national economy. BBC reporting shows that Zelenskiy’s government managed to raise over $70 million, but that this action precipitated an incredible wave of scammers attempting to masquerade as victims of the conflict in need of aid. Some of the scammers even cloned random peoples’ social media accounts to shill for the scam charities to those users’ followers.

Following the Ukrainian government’s example, charities have popped up faster than any regulator could conceivably play the game of Whack-a-Scam. Researcher Sherrod DeGrippo of ProofPoint said that nearly 3 million fraudulent wallet addresses were utilized to solicit scam donations since the start of the war as of April 12. They use photos of children, victims, and all possible methods to tug at investors’ heartstrings and compel them to send money to a stranger. The BBC highlighted one such email: 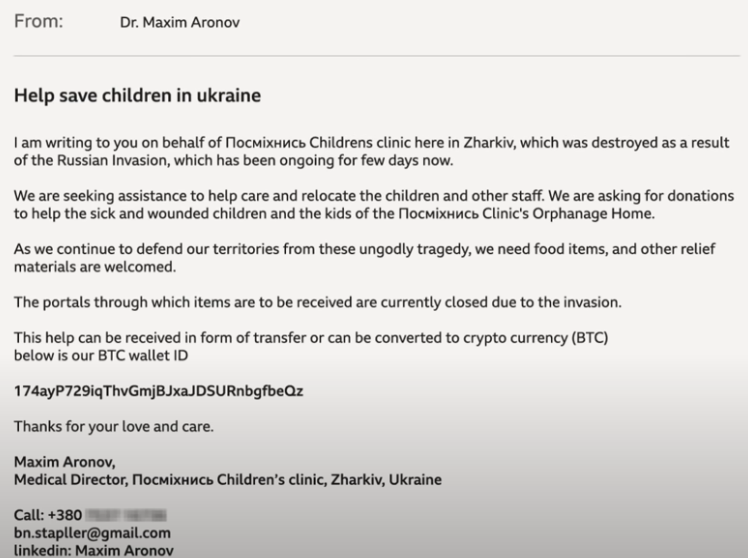 The photo of the fake doctor on the “Maxim Aronov” profile was stolen from a different LinkedIn profile, one belonging to a pediatric specialist from Mexico City, and a cursory check of the fraudster’s $BTC wallet address, the “174ay-” address, reveals that he’s taken in 0.01336 BTC in donations.

So, this ONE guy didn’t get all that much, overall, but that’s a lot of satoshis in good-hearted charity sent by well-meaning people. The scammer’s most recent donation was 11 days ago. The transaction page indicates small amounts of satoshis that added up to about $541 at the time of writing. I suspect that if 3 million wallets have participated in this kind of scam, not every wallet was taking in $541 worth of BTC; if they were, that would be a staggering $1.623 billion in fraudulent charitable giving. Crypto-nerds, if we all collectively gave a scammer $1.6 billion, I would appreciate it if the gang would at least give me a head’s up that we’re doing that before you execute that trade, please and thank you!

Cybersecurity Twitter account @ESETresearch wrote about one scam that purported to hawk a token called, unsurprisingly, UkraineToken! It has no clear humanitarian organization other than its colors and rhetoric, so it MUST be legit! BUY NOW! No, seriously: don’t buy it, now or ever. It’s just another scam token trying to play off peoples’ good intentions.

Do not worry, however; all is not lost. As with many things, the people who play irresponsibly with the funnest toys do not necessarily ruin it for the rest of us (even if, at times, they come dangerously close). Instead, we should celebrate the power of the blockchain and highlight how much legitimate donation was actually done! Famed Ukrainian crypto banker Michael Chobanian posts regularly on Twitter an Excel chart accounting for Ukraine’s donated crypto portfolio. Here’s one of them: 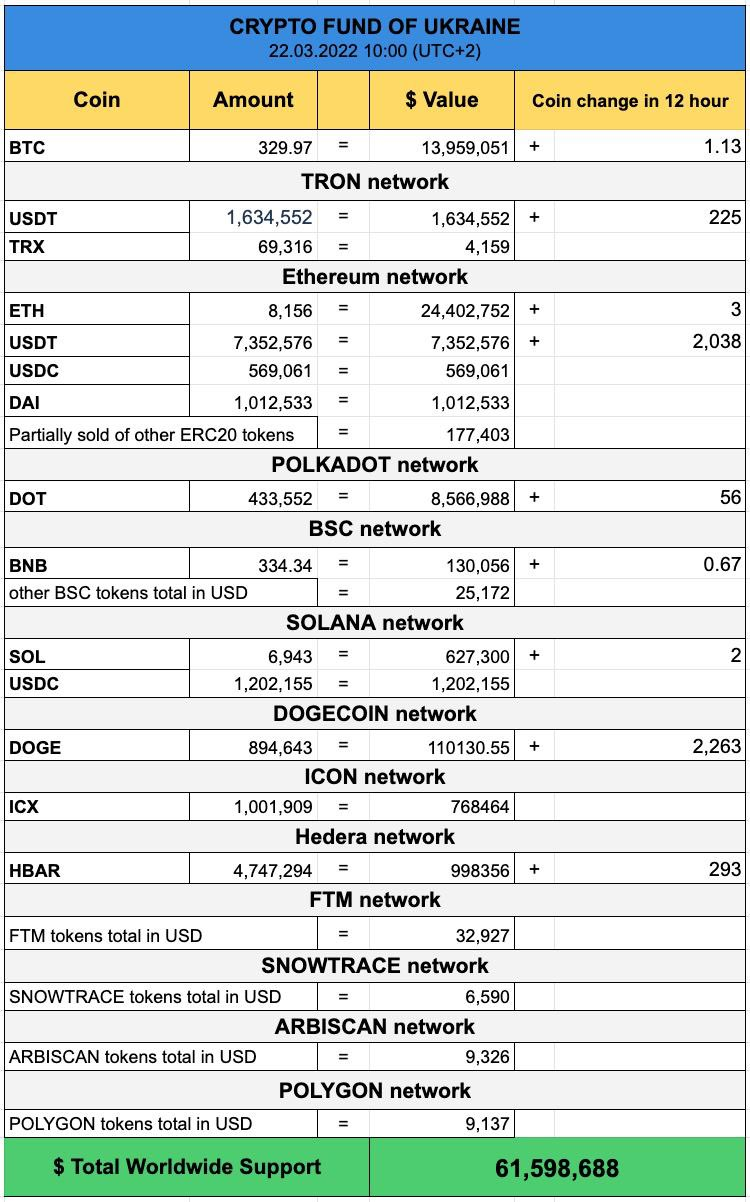 As with any crypto-project, a sense of DYOR must always pervade every action; the onus, as always, is on the crypto investor themselves to understand where they are sending their money, and to whom, to the best of your ability. Please do not take my word at face value, and feel free to confirm for yourselves that information I am sharing is correct.

Giving To Ukraine For Real

TechCrunch also did their part trying to investigate how, exactly, the Ukrainian government is using the crypto liquidity. Are they exchanging it for dollars? What are they doing with it to turn it into supplies? To that effect, Bloomberg has the answer, and it’s someone we’ve already met: the Ukrainian crypto banker Michael Chobanian!

Chobanian spoke bluntly, when asked by Bloomberg’s Alistair Marsh, what he was currently doing to help:

“I’m in charge of collecting, fundraising, and storing crypto, and also exchanging crypto to crypto and crypto to fiat, opening bank accounts for intermediaries or for the government, and then buying whatever is required by the Ministry of Defense. We also find the suppliers who are willing to sell us humanitarian goods, or helmets, or bulletproof vests for crypto. So I’m in charge of this virtual government crypto fund.

My role is to supply my people with all the necessities that they require and make sure that we can pay as fast as possible. It takes 10 minutes for a Bitcoin block to close [average confirmation time for a Bitcoin payment]. And it takes about three days to do the same thing through the banking system, because first we have to receive U.S. dollars in a bank account, that’s at least one day. On the second day, the bank makes sure that they have received the monies on the account and then it takes another day for the SWIFT [Society for Worldwide Interbank Financial Telecommunication, the message system used by most of the world’s financial institutions] payment to actually reach whoever the supplier is. So three days vs. 10 minutes—therefore, we prefer crypto. And you can understand that time is money for my country right now. So if we can save a minute, it means that we can save at least someone’s life, so we are trying to speed up the process and crypto is helping us here.”

It is an incredibly disappointing thing that such a conflict only precipitates more crime, more theft, more fraud, using this technology that I (and presumably many of you) are so fond of.

However, when push comes to shove, let it be known that technologically inclined enthusiasts from all over the world used their “magic internet monies” to cut literal days off Ukraine’s time to turn money over and into supplies and logistical components.

Regardless of one’s personal feelings about the war, that outcome is incredibly powerful, and having watched it unfold in real time, the events feel all the more surreal.

If you are disinterested in how your donation is spent, then you can add to Ukraine’s crypto war chest directly by donating to the links cited in the government’s tweet.

If you are interested in the way that money is spent, whether it’s due to a conscientious desire to avoid contributing to conflict and human suffering or for some other similar personal reason, reliable charities do exist that specialize exclusively in humanitarian aid. Your donations to the following three causes will NOT be spent on lethal aid:

All investors are encouraged, as always, to follow-up as much as possible. If you intend to send cryptocurrency to ANYONE, do your best to ensure they are who they claim to be, and let us all continue in our attempts to build a more honest and connected world. 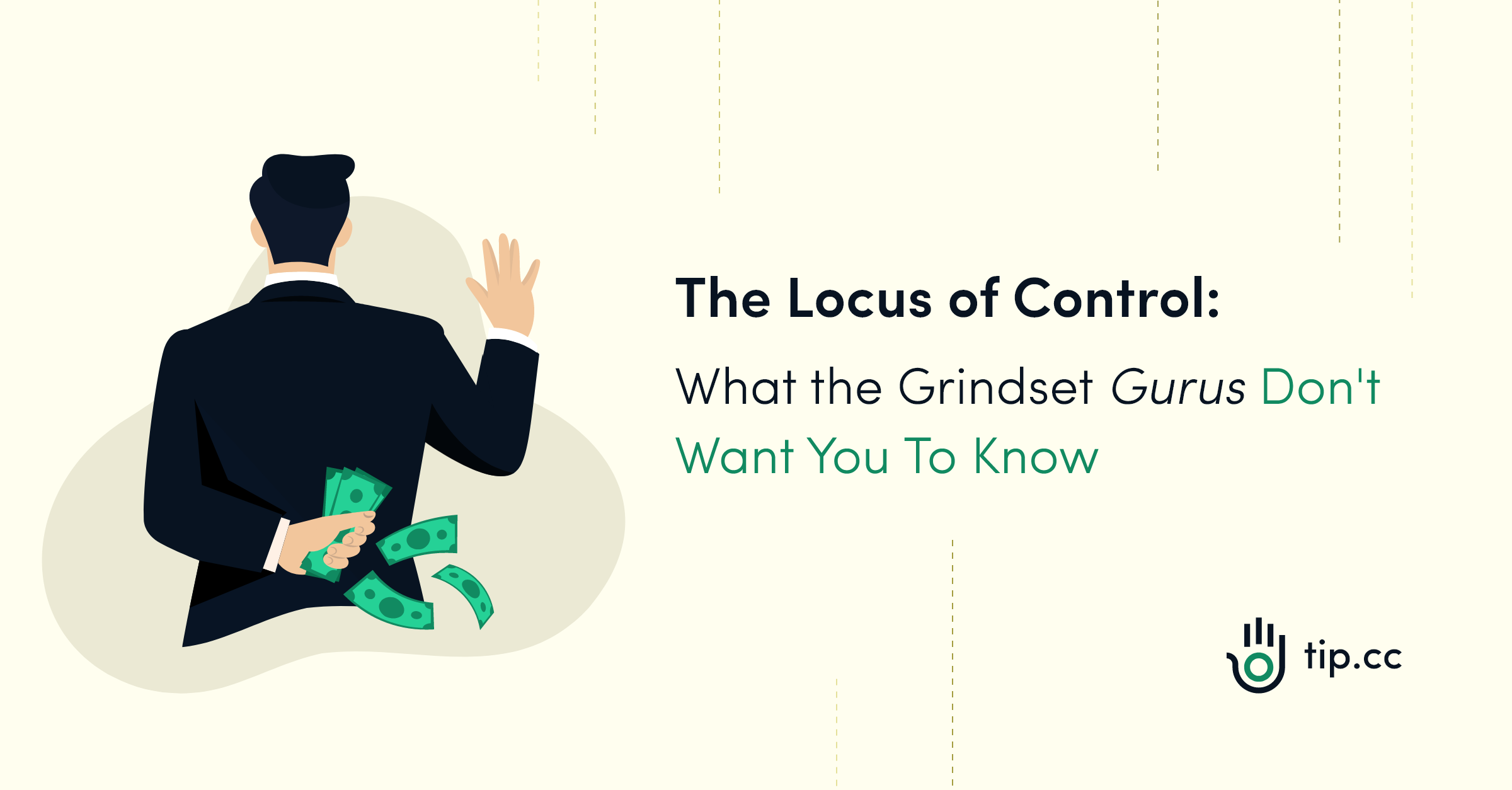 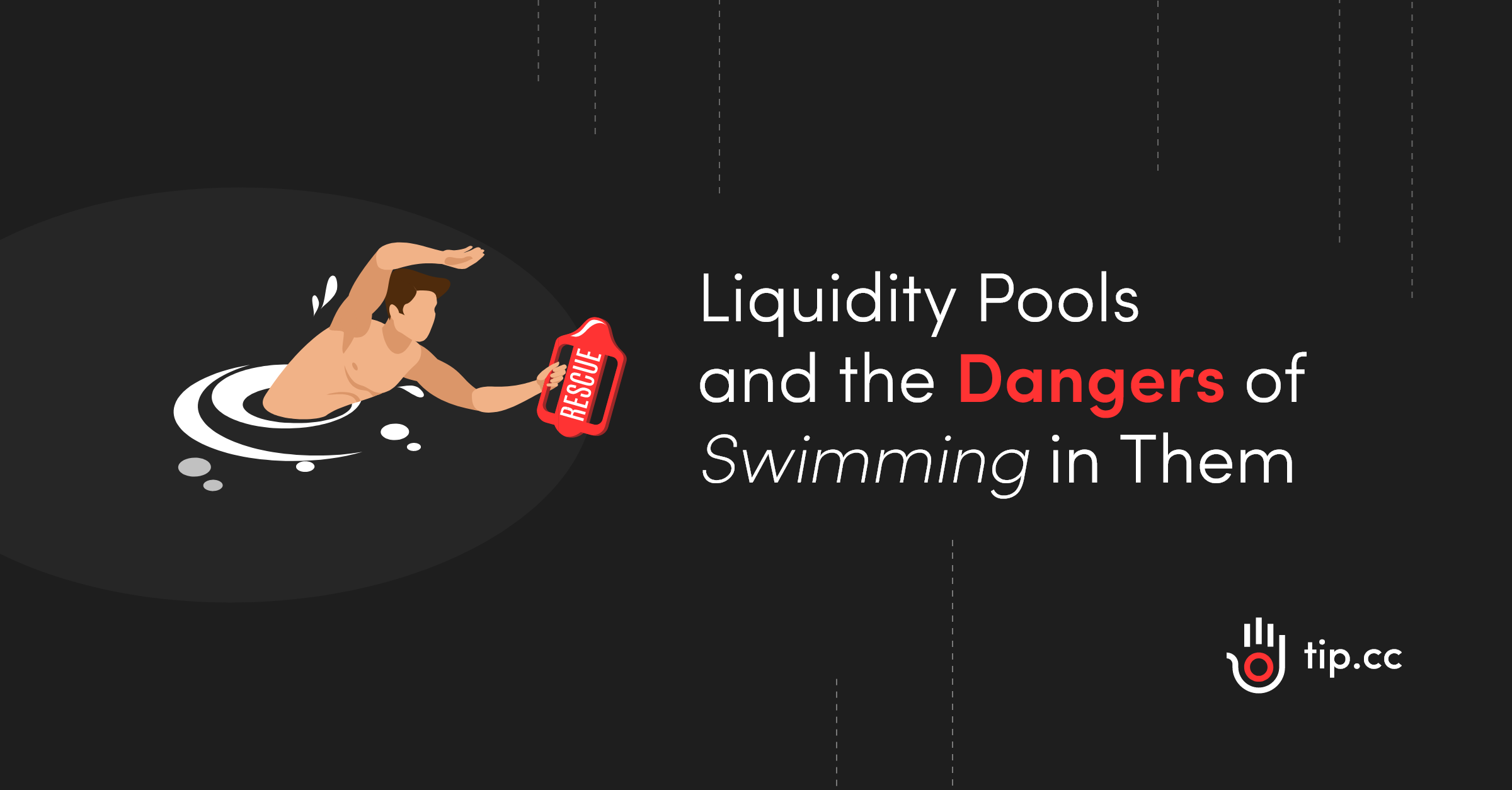